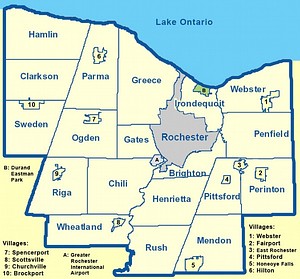 New York state's many and varied layers of government.

villages may be incorporated and overlap with one or more towns. Thus a NY resident will be a legal resident of a county and either a city or town. Some may also be legal residents of a village. Some areas within a town may be designated as a

hamlet, but it has no legal government status within NY.

You may start with Monroe County, which contains the City of Rochester and various suburbs, and either work up to the state and federal level or down to City, Town and Village level. For surrounding counties, see Monroe County in NYS Map for your starting point.