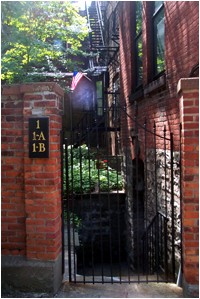 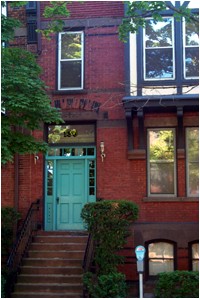 The Grove Place Historic District is consists of four streets in downtown's Grove Place neighborhood. It was added to the National Register of Historic Places in 1984 as Monroe County - #84000299 and includes 29 buildings on 81 acres. The area is "significant both architecturally and historically as an enclave of substantially intact small-scale (1850-1895) nineteenth-century residences which were built, owned and occupied for over 100 years by a complex extended family." Architectural styles include Italianate, Gothic-Tudor Revival, Queen Anne, Eastlake, and transitional Greek Revival cottages. The eclectic mix is nevertheless united by the structures' harmonious size and setbacks. Many of the properties are graced with attractive cast- or wrought-iron fences.

The Grove was the name of the original homestead of the Selden and Ward families, built in 1828 by Josiah Bissell and later sold to Dr. O.E. Gibbs. Samuel L. Selden bought the property in 1840 and sold half of it to his father-in-law, Dr. Levi Ward, and brother-in-law, Levi A. Ward, who served as mayor of Rochester from 1849-50. Due to the prominence of these two families, the Grove was for many years a focal point of Rochester business and society. It was here that George Baldwin Selden developed and perfected his internal combustion engine. Another Selden was Susan B. Anthony's attorney, while Levi A. Ward's nephew, Henry August Ward, is known as the founder of Ward's Natural Science Establishment.

In 1870 Judge Henry Seldon inherited the Grove and parceled off a northern portion to his son-in-law, Theodore Bacon, who built the Gibbs Street Townhouses (128-152 Gibbs Street) for his family. Rowhouses have always been unusual in Rochester, which has been noted for its prevalence of detached one- and two-family homes. (See also: the North Washington Rowhouses, also downtown.)

As Rochester continued to develop and grow, the Grove was purchased by the city in 1914 and demolished to make way for the new YMCA headquarters. Still, most of the buildings were owned by either the Ward or the Selden families well into the 1970s. The present historic district occupies over sixty percent of the homestead's former land.

Photos by BenMargolis, courtesy of RochesterDowntown.com.