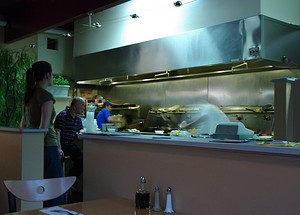 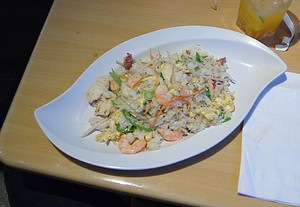 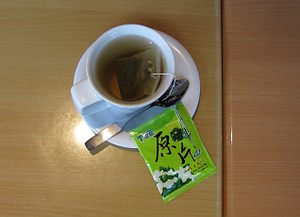 Located near the corner of Monroe Avenue and Culver Road.


ADMIN NOTE: Comments from before 2008 are now archived in New Ming/Comments

2007-02-05 14:27:45   Ming II is always a plesure to eat at. We've always loved the food there. My Thai father in law swears by it (which should say something about its authenticity) —DavidGersh

2007-11-12 23:52:21   Maybe they have gone through some changes because the restaurant I went to today was not the one described here. I am convinced there was at least 0.5 - 1 cup of oil in my noodles. I am aware that fresh noodles need a bit of oil in them to keep them from sticking - but not a whole cup for a plate. Moreover, it was utterly flavourless. The only thing I could taste was the oil. The chicken had a very slimy texture. Add in a couple of pieces of shredded carrot and cabbage and that was my dinner (and my friend's dinner...and my boyfriend's dinner. Scarily - we did not get the same dish.). —OneLove

2008-03-04 15:46:51   really nice staff (although the credit card machine wasn't working and that was clearly OUR problem to solve), and relatively tasty. . .but really dirty. not sure how else to put it. the menus were grimy, the condiment containers were grimy (one even had mold in it!), and grease just sort of hung in the air. shabby old teapots and dishes, which i wouldn't otherwise hold against them, except it added to the overall grimy effect. between the food and the people, i really would like to see them do well, but they need to give everything a good scrub down before they do anything else. —ElizMazz

2008-03-13 07:17:02   I think it is confirmed, their phone numbers are disconnected and I verified the for rent sign in addition to a hand written sign on the door
that says "sorry closed" —RichardSarkis

2008-04-18 15:21:46   Hey guys... we are reopening around May 15th. I will be the manager there. Yes... it was greasy and grimy... We are revamping the menus... redoing the interior and we will be opening back up soon! In addition to the popular noodle dishes created by Larry, we will be adding other items as well! —KarenPoon

2008-07-14 12:52:37   I was a fan of Ming's II when it was open, so I took an out-of-town guest to New Ming on 7/13/08 to see how it had changed under new ownership. I was immediately pleased with the contemporary atmosphere and new furniture. At first I was disappointed to see that there were fewer vegetarian dishes on the menu, as compared to Ming's II, but I was happy to see the addition of Viatnamese and Thai options, as well as new appetizers. My guest and I started with the fried tofu appetizer, which was excellent. The tofu was properly done, as it was thoroughly fried on the outside, but spongy enough within to absorb the excellent sauce that accompanied it. My guest ordered the garlic eggplant lunch special, which was also very well-made; the eggplant was cooked through without losing its flavor, and just the right amount of garlic was used to be tasted in every bite of the eggplant, yet without being overpowering. I ordered the sesame tofu lunch special, because it had been one of my favorites at Ming's II, and I wanted to see how it compared. I was pleased to find that they had actually improved on it! The tofu was well-cooked outside and soft, almost custardy, on the inside. The sauce was sweet without being sugary, as is often the case at other Chinese restaurants, and had a nice spiciness that added to the flavor rather than distracting from it. Our waiter was prompt and attentive the whole time, and the cooks are definitely making good use of the updated kitchen. I am happy to say that Rochester's newest Asian restaurant is now one of my favorites! —PaulBlackburn

2008-08-18 15:11:33   The upgrade from Ming II to New Ming is exactly what this place needed. I'd say the quality is about the same as KC Noodle (a bit greasy, but good), and with more Thai/Vietnamese options and the improved decor, I might be here more often. I'm not sure if the air conditioning was broken, or if it was just the heat from the open kitchen, but my only minor complaint is how warm it was inside. —McgMatt

2008-08-28 14:01:09   Vietnamese Bun is fantastic, as is the tomato fried rice. Love the new menu and fresh paint job, service is very friendly. And the price is right! We'll be back often. —AdrienneDahler

2008-10-12 15:31:51   New Ming on Monroe is a splendid place to eat Vietnamese food! The Bun with chicken is a generous bowl of fresh, crispy lettuce, cucumber, bean sprouts and cilantro. On top is a bed of perfectly cooked rice noodles and pieces of grilled chicken. The side bowl of drizzle sauce is fresh and delicious. As a native San Franciscan living in Rochester, I was so happy to find New Ming! The owner, Karen, is friendly and delightful. The restaurant is peaceful and spotless too. Highly recommend! —christopher0312

2008-10-14 17:12:41   I was a regular customer of Ming II and will certainly be of New Ming. The remodel has resulted in a fresh, cleaner restaurant. The service is excellent, and the menu has been expanded to include many new offerings. The Pho is excellent(mine was missing any hot peppers on the side plate, but the side sauce filled the spice void). The prices have been adjusted accordingly higher. It may not fill the quick and cheap dinner option slot that it once did, but the quality has increased to match and overall a welcome addition to the many dining options we have in Rochester. The website currently has some issues at this writing, but I discovered you can access the flash only interface at

2009-04-05 22:40:51   Having used to frequent House of Poon before Karen Poon sold, I was excited to try out New Ming today for a late lunch. The place wasn't crowded, it was just me and another table. The waitress was very friendly and helpful. I started with fresh spring rolls, which were delicious. I then had a big bowl of soup-I forget what it was called, but it was a tomato base and filled with vegetables that were so fresh and tasteful. The soup contained shrimp, which also was clearly very fresh. This is such a nice change from lots of Americanized Chinese restaurants, when vegetables' flavor takes a backseat to MSG. My only complaint was that my noodle dish, which was very tasty, was a pretty small portion. I think it was called Buton or something. For over twenty dollars for one person at a Chinese/Asian restaurant, I expect to leave stuffed, but I probably could have had a whole other noodle dish on top of what I ordered. Overall, extremely tasty and FRESH Asian food. I will certainly be back again to try more dishes here. —mooster42000

2009-04-08 15:03:25   Very clean decor for an Asian restaurant in Rochester. The regular employees are very friendly and helpful. I agree with other comments about the freshness of the vietnamese dishes. The food is good, though not very spicy (even when you order it spicy). —EllenKelsey

2009-04-26 10:04:49   We've been to the newly opened restaurant several times now. Been very good each time. Service is always friendly, the food is great, and the prices reasonable. Try the mango lemonade it's wonderful. Their fried rice is terrific, flavored with just a touch of soy sauce instead of the entire bottle (see photo above). Good consistency from visit to visit too. Last night we had an appetizer, two entrees, and three lemonades and bill before tip was less than $30. —DottieHoffmann

2009-06-14 17:08:28   The revamp was much needed. Since then, I have never been disappointed in my choices. I recommend the mango lemonade, tomato basil fried rice, pi par tofu, sesame tofu and the mango roll (although it is tough to go wrong with this place). The service is fast and friendly. The prices, while not cheap, are reasonable. If you like your food spicy, I suggest asking for the Sriracha, hot oil or even nam pla prik (really hot chillis in fish sauce). —OneLove

2009-07-19 02:10:06   Had a great dinner at New Ming tonight! Pi Par Tofu and Curry Dumplings were delicious. Panang Chicken could (should?) have been spicier, but it was still tasty. The Pan-fried Noodles were *almost* as good as at Ming's Noodles. Big thumbs-up overall. —NathanHenderson

2010-02-08 11:15:05   Note that comments may apply to Ming's Noodles (a.k.a. Ming's II) rather than New Ming. I updated the pages to try and discern which restaurant is which, so from now on, the comments should apply to New ming. —JasonOlshefsky

2010-03-08 11:45:38   This place is always awesome everytime we go. The owner, Karen, is hilarious and friendly. The food is awesome. I second the poster above's comment about their salt+pepper wings. What I love most is the ability to customize any order without any confusion from the waitstaff. —TippingPoint

2010-04-20 15:18:43   I can't parallel park at all, yet I am willing to drive up and down numerous blocks looking for a parking spot large enough (i.e., at least 2-3 car lengths). Why? Because New Ming is just that good. The dumplings? Amazing. The fried rice? Amazing. The Thai basil? Amazing. The Kung Pao chicken? Amazing. The service? Amazing. The pho? Not really my thing, but probably amazing if you like Pho. Mmm... my mouth is watering just thinking about New Ming. I know where I'll eating tonight. —ChristineH

2010-11-13 11:01:55   Just ate here last night for the first time in a while: very good food and prices! I had the pho with rare beef and was quite happy with it, got a nice buzz from it. My sweetie had the Hong Kong noodles with pork, stir fried, and ate the entire dish. Our friend had the chicken satay, which was different than I'm used to, barbecued, and the mango salad, which she didn't like so much, but I thought was delicious. We'll be back! —KatieSchmitz

2011-02-11 13:57:46   Ordered take out last night. Took a few tries to get through on the phone and I ended up ordering the fresh veggie spring rolls and the veggie phat thai. I was quoted 15 minutes but when I arrived my food wasn't ready. Wasn't a huge deal; felt kind of bad as there was only one server who was also managing all of the take out orders. Ended up waiting a total of 25 minutes but the server (manager?) was apologetic. Food was really good and I was able to make 2 meals out of it. Just finished the leftovers and am still craving more. Doesn't have the greasy taste to it like a lot of chinese food has. Will definitely go back. —dmarie

2011-05-23 13:49:56   Great curry dumplings, great Pho (although would have preferred some sliced chili rather than chili sauce)! Attentive service, highly recommend based on my experience. I will be back... —sieats

2013-07-12 21:46:38   Discovered they make a pork steamed bun, similar to Han up the street, a bit different in the execution but still amazingly good. Mmmmmmm another source for steamed buns !!! —DottieHoffmann

2013-10-29 17:02:40   This place may have the best pho on Monroe ave (it certainly has the fastest pho in town), and for that alone, I should give it 4 stars. And I would, if it were not for the dilapidated conditions of the place. I've never had any problem with any of the foods I've ordered for takeout (sticking to the Vietnamese and Chinese menus), but every time I stop there, I wonder when she's going to clean the place up. The old metal ceiling looks like it's about to fall down, and the walls in the place look none to clean (at least she cleaned the dust/grease accumulation off the light fixtures recently). What seats they do have inside are uncomfortable, and certain seats (those below the rusted, falling ceiling) are places best avoided. So, due to the deplorable conditon of the location, I really can't give her more than 3 stars.