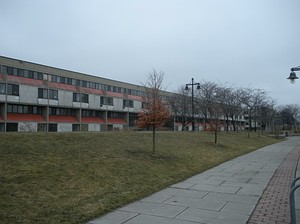 View from the river walkway, March 2009

River Park Commons was a public housing complex along the eastern shore of the Genesee River, north of Ford Street Bridge and across the river and somewhat south of Corn Hill Landing. It was built in 1975.

River Park Commons and demolished it in 2009. Now located on the site are The Hamilton Apartments (2010) and the Erie Harbor complex (2012).


3/25/2009: It appears environmental / haz-mat work has commenced at the Ford Street end of the Commons. Either that or the innards are being simply being ripped from the rooms. Chain link fences surround the parking lots and plywood is being added to the doors.


2009-04-07 19:36:40   4/7/2009: Large excavators have torn down the building nearest the Ford St. Bridge and I think they're just going to keep on going. It appears as though there are still tenants at the other end of the development, though. If they hold out, demolition will have to stop but I don't doubt that demo work would continue right up to (and even around) where the tenants are still residing. It's a classic move by builders to get stubborn tenants to begin clearing out. —BatGuano

2009-04-16 17:43:03   4/16/2009: Upon closer inspection, I don't think any tenants are living in the dilapidated mess that remains. Demo work appears to have stalled to let the contractors remove debris from the demolition of the building nearest Ford St. Bridge. Otherwise, doors have been, for the most part, boarded up and entries to stairwells shuttered. —BatGuano

2009-05-09 14:34:17   Looks like the next building has been demolished. Lots of twisted metal, concrete and standing water where the building once stood. The view of the river is going to be great.. Do they really have to go back in with more housing? —BatGuano

2009-06-30 17:55:13   Looks like the contractors are starting to paint the tower with schizo blocks of primary colors. I'm going to hold off final judgment until I see the finished product but, typically, you can't shine a turd. Other than that, demo work is continuing but the piles of rubble aren't disappearing fast enough. I want to see the damn river from Mt. Hope!!! —BatGuano

2009-07-21 14:26:48   the low rises look to be completely demolished the last time I drove by. Who ever though River Park Commons was a good idea to build on our waterfront should be tared and feathered. Hideous looking building, any other city would capitalize on their river front. Glad to finally see Rochester getting in on it after 200 years. —JohnJoseph