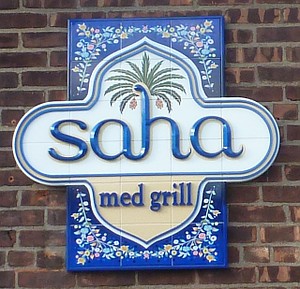 Saha Med Grill was a Mediterranean fast casual restaurant. Their specialty was healthy meals using local, seasonal, organic food. The menu supported the fundamentals of the Paleo Diet and draws from all over the Mediterranean region. The word "saha" means "health" in Arabic, Hebrew, and Turkish.

They also did catering.

The location had an outdoor patio for warmer months and has a lunch and dinner menu. The Pittsford location served the lunch menu all day.

The Rochester location opened September 8, 2014 and closed January 2018, followed by Pittsford on January 5, 2015 which closed in 2017. The College Town location opened November 27, 2015 and closed October 22, 2017. Owner Sami Mina was also planning to nationally franchise. He is the founder of Aladdin's Natural Eatery and also the owner of Pomodoro and owned Via Mina.


2015-11-04 06:53:54   Went to the Pittsford location last week. The chicken shawarma pita and tuscan bean soup sounded good. In a nutshell, the pita was the better choice of the two, although it was missing some pizzaz when it came to flavor. The bean soup was a total dud, had to hype it up with salt and pepper as it as so bland. Better choices abound in the area. —bayton