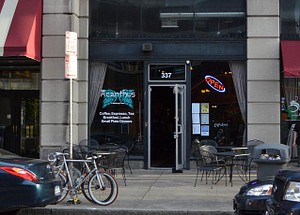 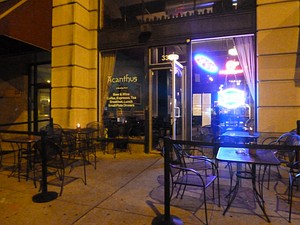 Acanthus Cafe was a cafe and coffeehouse in the East End. The name

Acanthus refers to a tropical flowering plant found in the Mediterranean region and is also Latinized Greek for "thorny."

On the culinary side, Acanthus specialized in South Pacific meals served on skewers, with limited-run specials each week. They also served salads, chicken dishes, nachos, and unusual tacos. They did not offer sandwiches, however, pursuant to a non-competing agreement imposed by the Subway next door.

There was an ATM is onsite. Outdoor seating was also available.

Acanthus opened on April 18, 2012. According to owner Christopher Hilfiker, Acanthus was founded to "offer more community-based events that would bring together people who normally wouldn’t hang out with one another." He and business partner Allison Mayer traveled to Portland, Oregon to study the coffeehouse culture there and were impressed that so many people knew one another, despite the city being three times the size of Rochester. For the summer of 2012 Acanthus will be hosting a variety of cycling events, including a weekly Espresso Express ride. Other events are planned for the future, including happy hours with Santiago Cigar Factory next door.1

Hilficker and Mayer also owned the Living Room Cafe in Upper Monroe. They decided to close this business in June 2012 to focus on running Acanthus.

Acanthus is a lovely little restaurant on East Avenue near Alexander and a short walk from the Little or the Eastman. We had dinner last night (two couples) and found it to be a calm and pleasant experience with friendly service.

The server recommended trying the French onion soup which was prepared as a vegetarian soup (made with butter, but not beef) with a rich onion-y sweet broth and just the right amount of crouton and cheese and not salty like they so often are. Delicious! The artisanal cheese plate, $15 was generously filled with exceptional cheeses (four were listed on the menu, but the plate arrived with 7 different cheeses!) and sliced fruit and small sliced baguette (extra baguette was promptly served when requested, at no additional charge).

For the entrees, we tried the shrimp skewers, Harvest salad with salmon and the special salmon dish of the day. Everything was fresh and cooked to perfection with side dishes and plenty of salad for the salad dish and wonderful homemade dressings like the Mandarin/Ginger and the Cucumber/Wasbi.

The place is comfortable enough to linger and they have a nice selection of moderately priced wines by the bottle or glass and bottled beer. We decided to stay a longer and tried some desserts. They had a just sweet enough lemon cake and a very authentic baklava that was warm with a dash of honey on top. Coffee was good too and served in a huge mug.

Prices ranged from about $10 to 15 for the entrees and the whole bill with beer and dessert and coffee was under $100 for the four of us for 2 soups, 3 salads, 3 entrees, cheese plate, 2 beers and 2 desserts.

Everything was excellent, but there were few people in the place. We hope they won't stay a secret for long, the deserve to be popular. They're new to East Avenue and deserve a try. —michaelbrisson

2012-11-21 14:32:35   I went there for lunch with two of my friends. Their soups were good, their chicken noodle soup was actually outstanding. But the waiter insisted that the seafood chowder was bacon free, and it obviously wasn't, when my muslim friend started eating it, she noticed, the waiter was nice enough to get her some chicken noodle soup.
Then, they took forever to bring the main course, the girls had ordered two orders of chicken kabobs and I got an order of a meatball puttanesca taco.
The waiter arrived with one of the kabobs and my tacos, he said there was a miscommunication with the chef and he only made one if we were willing to wait even longer than we had already waited, the chef would make the other one. We said no thanks, the girls would share the kabobs.
The puttanesca was sweet, and the meatballs had lamb which made the whole thing too cloyingly sweet, I only ate one. The kabobs that we got, after that very long wait, were raw.

My friends both ask for more of the chicken soup, instead of their meals, and he offers to comp us for dessert. We get our bill, I go to put more coins on the parking meter (it's been over an hour); come back, pay, and he says "Have a good holiday". Never brought the soup or dessert.

I got back to work to have some peptobismol, that taco was not good for my stomach —EmRosario