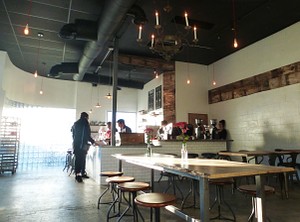 third wave coffee shop and roaster. Their brews are direct trade and roasted in small batches. Glen Edith is also as wholesale to local restaurants and coffeehouses nationwide.

Glen Edith's cafe was originally called Pour Coffee Parlor. It is located off Park Avenue, behind Cafe Sasso. In addition to their coffee, they also offer a small menu featuring breakfast and lunch options, including a vegan Jack Rabbit sandwich. Some of the pastries are gluten-free. There are also several local craft beers on tap. The roaster is also located here.

In November 2015 they opened a second location in the Neighborhood of the Arts with The Upper Crust Cakery. The bakery left the partnership a year later but Glen Edith continued to operate out of the space until 2021.

The name derives from the historic Glen Edith Hotel once located on Irondequoit Bay. In 1953 it was converted Glen Edith Restaurant, which closed in 1996. Ebel purchased the brand in 2009 after he came across an old Glen Edith sign in an antique store. He and several friends opened a motorcycle workshop and club under the name in 2012. Eventually, one of the other owners decided to relocate, while Ebel wanted to get into the coffee business. As a result, he opened Pour Coffee Parlor on April 28, 2014. The roaster half of the business launched in May 2015.

In January 2016 it was announced that Pour was officially changing its name to Glen Edith to prevent brand confusion, especially after the Upper Crust Cakery opened in November 2015. They also owned Boxcar, a donut bakery.


2016-01-18 10:08:18   Excellent pourovers. One cup will set you back around $3, or you can get a six cup pourover to share for $7. So much flavor in a cup of coffee! Interesting place. The walls are adorned with reclaimed wood and Civil War era portraits. —alexandergartley

2017-04-09 14:49:09   I went to the Elton Street location on a Sunday at about 1 pm. I had a pour-over Rwandan with a chocolate chip muffin. I think it was about $12. The coffee was great (muffin was fine, I cared more about the coffee). The barista talked through every step. There were several people in the shop, mostly men with laptops. Note that there are several stairs from the front door down to the bar/seating level, no handicap elevator. The atmosphere is bright on a Sunday afternoon, I liked it. —GaryGocek