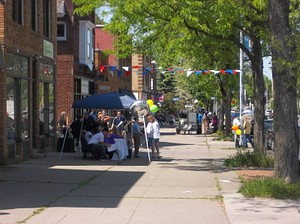 Street scene during the 2012 Ease Down on Thurston & Arnett neighborhood festival. (Photo by John Boutet).

Thurston Village is the name given to the Thurston Road commercial district in the 19th Ward. Residents and business owners wished to establish a distinct identity. Unlike Park or University Avenues, Thurston Village caters primarily to the people who live there rather than being a destination. Establishments here tend to be corner stores, barbershops, beauty salons, neighborhood bars, and small restaurants. The surrounding neighborhood is very diverse and boasts a broad range of incomes.

The Ease on Down Thurston Road festival was first held in 2011 and featured food, music, prizes, and sidewalk sales.

Hunt's True Value Hardware was a neighborhood institution for over a century.

Places with RocWiki pages or external websites only. See the Thurston Road page for a fuller list.