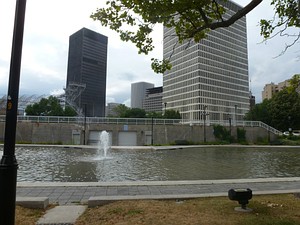 The Manhattan Square Neighborhood refers to the area surrounding Martin Luther King Jr. Memorial Park, previously known as Manhattan Square Park. With both the park and the Strong National Museum of Play within its borders, as well as its proximity to the East End, the neighborhood places an emphasis on recreation.

The Strong Museum also provides most of the neighborhood's restaurants and shopping opportunities.

The HSBC Building is located here. In 2012 the busy intersection of Broad Street, Chestnut Street, and Court Street was

transformed into a traffic roundabout that will eventually include landscaping in the center. In September 2014 UR Medicine announced that they will be opening a new medical practice in the old post office at 454 East Broad Street.1