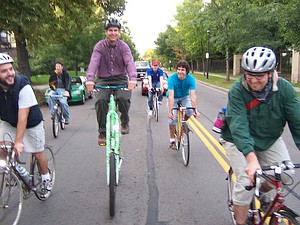 Critical Mass is a group bicycle ride which takes place at regular intervals (usually on a monthly basis) whose purpose is to "celebrate cycling and to assert cyclists' right to the road." Although it is a nationwide movement, there is no centralized organizational structure and no official leaders. The CM group in Rochester has been in existence since 1998.

Critical Mass is a monthly bicycle ride to celebrate cycling and to assert cyclists' right to the road. The idea started in San Francisco in September 1992 and quickly spread to cities all over the world. Critical Mass has no leaders, and no central organization licenses rides. In every city that has a CM ride, some locals simply picked a date, time, and location for the ride and publicized it, and thus the ride was born. CM is an idea and an event, not an organization.

Critical Mass originated in San Francisco in September of 1992. It spread to Rochester in 1998 when University of Rochester graduate student Mark Anderson began organizing rides originating at the River Campus. Rides grew to about 50 cyclists by summer 1999, but many first-time riders expressed dissatisfaction and felt turned off by illegal moves and the hostility toward cars and never returned. By winter 2001 the rides had fallen apart, and occasional riders would send mail asking where everyone was. Mark finished his doctorate in May 2002 and departed to teach in Geneva NY.

Tobin Fricke arrived fall 2004 as a graduate student in physics. With the help of Robert Polyn and others, Fricke co-founded RocWiki and Ant Hill Cooperative, and, along with Andrew Hall of Cooperative EcoHouse, revived Critical Mass in Rochester. He penned

Rest assured that Critical Mass is still very much alive in Rochester in 2012. For more information on the current status of Critical Mass nationally, see footnote at Former National Critical Mass website (below).

Don't have a bike? UR students may borrow bikes from City Cycles.

Past Rides and Pictures

Note that these archives are no longer updated.