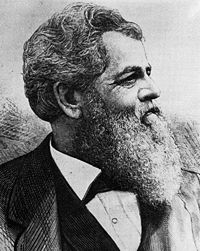 The story begins March 19, 1817 where, in a small cabin on Culver Road near Empire Blvd in Rochester, NY, Seth Green was born to a family of farmers. He was taught from a very young age how to plant crops, hunt and fish. Eventually his family, being sick of farming, moved to a then just developing area called Carthage on the Genesee River near the Lower Falls where they opened a tavern on the high banks of the river.

As a boy Seth quickly became friends with some local Seneca Indians and over the years they taught each other hunting and fishing secrets they had learned from their fathers. As a young man he would catch fish in the Lower Falls and sell them to locals and ships crews that were docked in port. When coming of age, Seth found he had to start providing for himself and having such a solid foundation in fishing, he choose that route.

The timing was right, he started moving about to different fishing areas and eventually found himself with enough business to open a shop right on Front Street, near the High Falls. The new shop grew over the years and became very successful, so much in fact that by 1857 Green was considered the largest dealer of fish in NY and also the greatest fishermen in the state. Under his command, his team of 100 men was reeling in anywhere from 12 to 25 tons of fish a month.

In 1864, after years of studying, catching and selling fish, Seth though maybe there could still be more. That summer he sought out some experimenting grounds and moved in on an area he knew to be an ideal location. Fed by fresh springs and with a consistently cold temperature of 45-60 degrees, Caledonia Creek was perfect for hatching brook trout free of season-limitations and pollution.

Soon there were large buildings packed along the creek and the Caledonia Fish Hatchery was born. Inside were huge takes where Green began his famous research in fish hatching and where he would ultimately perfect Artificial Propagation. At that time, most hatcheries were getting about a 25% hatch rate but by using Dry Impregnation Seth was able to achieve over 97% success rate. This trick was kept secret for years and helped Green become even more successful and famous than ever before.

Seth is well known for having at one time the largest fish hatchery in the East and for the hard work he did that birthed an industry. Raising trout actually became a fad in the 1870's because of him. The story goes on and if you’re interested (I recommend it) pick up a copy of Seth Green-Father of Fish Culture by Black, it's recommended reading.

Fish hatching, and fish catching. with R. Barnwell Roosevelt in 1879.


2012-10-22 11:09:54   I remember Seth Green's name from earliest childhood. My Grandfather, Howard C. Russ was foreman of the Caledonia Hatchery at the time and Seth Green's picture hung on the wall in the hatchery building. I know Grandpa was there before WWII because my father went to work for him at the hatchery after returning from the war. I believe he was foreman until the early 1960's.

My Dad, Fred Allen Russ lived in the house at the Caledonia Hatchery when he graduated from HS. I have vivid memories of visiting my grandparents at the hatchery house - I can still remember lots of details of their home, including piles of wonderful books on one of the two inside staircases and a great front porch facing the Springbrook Inn. We lived in Caledonia on Jane Street at the time.

In the mid 1950's, (1956?) my Dad passed the civil service exam and was made foreman of the brand new Cedar Springs Fish Hatchery located about 5 miles away, just off North Road between Caledonia and Scottsville. Our family lived there until 1963 when Dad was promoted to a much larger hatchery in Chateaugay, NY. —FredEricRuss

2015-01-18 10:32:17   Seth Green is my Great Grandfather. My dad recently gave me 2 of the original Fish Hatching and Fish Catching Books and also an original signed picture by Mr. Roosevelt addressed to Mrs. Seth Green. Plan to visit soon. —DavidTaylor