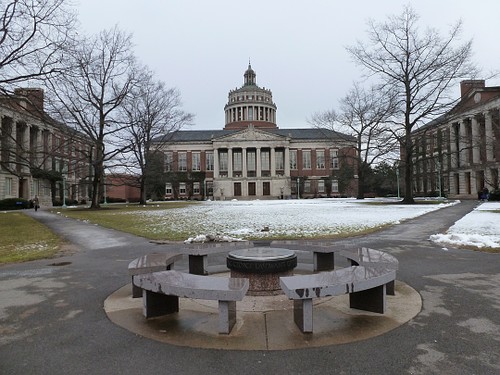 View from the center of the Eastman Quad. The building to the left is Morey; the one on the right is Bausch & Lomb.

Rush Rhees Library is the main library at the University of Rochester River Campus. It contains nearly three million books on 42 miles of shelving and was dedicated in 1930 as one of the first buildings of the River Campus. An addition completed in 1970 wraps around the original building's back and parts of its sides, and is of a more open, modern style that compliments the original Greek Revival.

The River Campus tunnel system can be entered through the ground floor.

Rush Rhees Library was named after the University's third president, Rush Rhees, a former Baptist minister. A personal friend of George Eastman, it was during President Rhees's administration that the Eastman School of Music, the University of Rochester Medical Center, and the River Campus were built and UR became the research university it is today.

In addition to the main Rush Rhees Library itself, the building also houses several smaller specialty libraries. They are as follows:

Each of these libraries has their own hours - see the websites.

The Department of Rare Books holds two to four exhibits each year which are open to the public during the department's regular hours. Past exhibits have included Claude Bragdon, the artwork of

Exhibits relating to the University's history can also found in the Great Hall. Past themes have included the history of women at the University, the River Campus architectural drawings of John Wenrich, and the Hopeman Chimes and Carillon. The Great Hall exhibits are changed twice a year.

Student and faculty art exhibits are hosted at the Art and Music Library.

The 186-foot tall tower of Rush Rhees Library initially held the Hopeman Memorial Chimes, gifted to the University in 1930 by the children of Arendt Hopeman in his memory. They contained seventeen bells.

In 1973 an examination conducted of the chime concluded that most of the bells were beyond repair or tuning. The Hopeman family subsequently paid for the purchase and installation of the Hopeman Memorial Carillon, which was officially dedicated in December. Today, the carillon still sounds the Westminster chimes every fifteen minutes and can be played by the students of the Carillon Society. Concerts by professional visiting carillonneurs are offered every Monday at 7:00PM in July and can be heard on the Eastman Quad. One of only seven carillons in New York State, its fifty bells are audible up to three-quarters a mile away with no amplification.

A chime has fewer than 23 bells. A carillon has 23 bells or more, arranged in chromatic series, played from a touch-sensitive keyboard (North American definition).

Rush Rhees Library is wheelchair accessible through the ground-floor Library Road entrance. Navigating the building, however, can be complicated. To get to the first floor, take the elevator located to your right, by the bathrooms behind Connections Cafe. You will end up in Gleason Library. As this elevator does not offer public access to the second through fourth floors, you will have to leave Gleason and head towards the circulation desk and use the elevator there.

The fourth floor hallway has a raised level that requires a small staircase. There is a wood ramp but it's very narrow and this contributor has seen an individual in a motorized scooter struggle with it.

If at any point you require a wheelchair, you can ask the circulation desk and they will provide one.