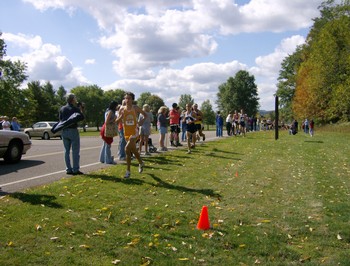 Black Creek Park is located in the town of Chili. The trails are a little limiting for any run longer than 7 miles, but the park offers some soft surfaces through the forest as well as bridges over some wetlands that are rather fun to run on. The main entrance has a couple soccer fields and trails extend from that location. The park hosts a few high school, club regional, and collegiate cross-country races in the fall. Racers will often comment about the challenging hill in one of the back fields. The annual Run to the End 5K fundraiser takes place here.

Cobbs Hill Park is in the south of the city, in between Culver Road, Monroe Avenue, and Highland Avenue. The main driveway makes a one-way loop atop the hill that is approximately three-quarters of a mile long. There is also a flat, lighted paved walkway that circles around the reservoir, making it an excellent place to run a late night workout. The trails are fairly extensive, especially for being near the center of Rochester. Most of the trails are located in the eastern part of the park, called Washington Grove. Pinnacle Hill is near Cobbs Hill and has some great trails to run up. In combination with Highland Park, these three parks make for decently trail run through the middle of the city. Also, one get a decent hill workout on the long hill facing Monroe Avenue (about 200 yards long). There are also some very spacious fields facing Culver Road and Monroe Avenue; good to run intervals or repeats. In the summer, Cobbs Hill Park plays host to few local cross-country races.

Edgerton Park has been a major institution in the Edgerton neighborhood since 1911, has a track and walking trail. Jones Square Park also has a track.

Ellison Park is located on the eastern edge of Rochester near 590, Empire Blvd. and extends south of Browncroft and Blossom Roads. Ellison Park offers miles of great trail running. The park is divided into a northern and southern section. You can try to enter the trails from the southern tip of Irondequoit Bay on Empire Boulevard. At that location, trails tend to be more technical single track and is a fun park to get lost in (and relatively manageable to find your way out). In the southern section at the entrance on Blossom Road, you can find some challenging hills, climbs, and even see the ruins of an old hotel are all included in this park. The park connects to Tryon Park with a small waterfall within. The park extends further southward with a trailhead on Penfield Road.

The Erie Canal Path path travels along side the Erie Canal. The pathway is mostly flat (since it runs parallel to the waterway), but it offers a serene and traffic-free run through the busier sections of Rochester and the suburbs. The path intersects the Genesee Valley Greenway and Genesee Riverway Trail at Genesee Valley Park. Trails often run on both sides of the canal in which one side may be gravel. The path turns to gravel both east and west of the city in the towns of Pittsford and Greece, respectively. For flat smooth running, the canal path offers one of the best surfaces. 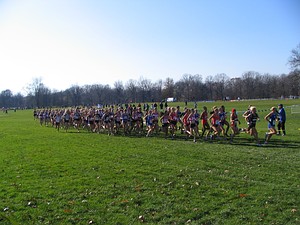 Genesee Valley Park (often called GVP) could be considered the most important cross-country venue in the greater Rochester area. At this park, there are numerous regional, sectional, and national cross-country races. It is the home course for the University of Rochester (RIT will race there occasionally). The McQuaid Invitational, an internationally known event, is raced every fall at the park. Also, the Genesee Valley Harriers (GVH) use the park as their home course with the $5,000 GVH Cross-Country Invitational each year. In late fall of 2005, they hosted the USATF National Cross-country Team Nationals in Rochester. There is a variety of trails in the park, paved and unpaved, and an extensive network of bridges which cross the Erie Canal and the Genesee River. The park is a junction in which many important Rochester trails converge. They include Lehigh Valley Trail, the Erie Canal Path, the Genesee Valley Greenway, and the Genesee Riverway Trail. There is an adjacent golf course (which is also used for races occasionally). While the fields and trails on the eastern side of the river are good to run on, don't forget the western side of river with its connections to points south, west and east. Trails extend on both sides of the river north into the city of Rochester. Both east and west of the river, Erie Canal Path will extend and take you to your destination. Both the Lehigh Valley Trail and the Genesee Valley Greenway trail south on opposite sides of the river. The Lehigh Valley Trail from East River Road to Brighton Henrietta Town Line Road has a soft cinder surface with an out-and-back distance of 5 km, making it a perfect place to get in a timed speed workout. Overall, GVP offers plenty of running options for anyone who comes there.

Both Highland Park and Mt. Hope Cemetery are located in the southern section of the South Wedge district. The trails in the park are slightly limited, but the run can be amazingly beautiful in the spring and summer. The park is in full bloom by May, with a variety of flowers including lilacs, azaleas, dogwoods, daffodils, and tulips. The paved trails around the reservoir are especially colorful can give small hill workout. There are a few extremely hilly unpaved trails, the most established being through the woods along the park's northern border. The park is attached on the western side to Mt. Hope Cemetery. The cemetery offers numerous traffic-free roads in which to run. The hills in the cemetery give a variety to any tempo or interval workout. Also, in its older sections, the cemetery is well-shaded from the summer sun. The biggest advantage of Highland Park and Mt. Hope Cemetery is their close proximity to the University of Rochester, GVP, and Cobbs Hill Park, where runs can be extended.

Mendon Ponds Park is in southern Monroe County far from the center of Rochester, but offers the best variety of dirt trails to run on in the region. There are several different loops clearly marked. One can also pick up a map at the park office. The park is host to multiple local and regional high school cross-country races. Colleges have been known to run at the park in the past when they are looking for a more challenging course. The park has plenty of hills to run up, including the two more notable ones are Cardiac and Coronary. One large pond marks the center of the park with multiple entrances to the park from all sides. The trail running is magnificent with hills along the east, south, and west sides. You can run around the pond or into the deep woods with many miles to choose from. This is hardly a place get bored with your options. The park makes a good destination for a runner who needs a break from the city roads. I'd suggest coming when you have a long mileage day ahead.

Your Input on Running: