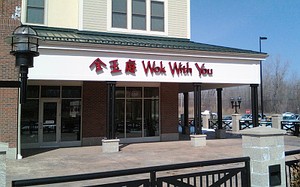 Wok With You was a restaurant that served a variety of Asian cuisine in the complex of Park Point at RIT in Henrietta.


2008-12-02 13:34:22   Last night after finding a buy one get one half off coupon for this place on the Park Point at RIT website , my husband and I decided to give this place a try. We're fans of Golden Port, one of the four total restaurants (House of Sushi joined with Golden Port and Siam in Corn Hill Landing as well as this one) in the Rochester area owned by the same person, Wayne. We arrived a little after 7 pm, there were a few groups already there but by no means busy. The decor is very nice and clean but a little on the simple, almost bare side - but hey, the place just opened not too long ago. The hostess promptly welcomed us in and showed us to a table. We ordered crab rangoon for an appetizer for both of us, jasmine tea and the maki dinner (spicy tuna roll, unagi roll, and california roll with miso soup and salad for $14.95) for me and my husband ordered chicken in kung pao sauce that came with some perfectly prepared rice for $8.95. Our appetizer was served quickly, crab rangoon being a common offering in asian restaurants, it was quite good and fresh. The miso soup had plenty of seaweed, tofu and scallions in it making it a nice accompaniment to the meal rather than just a boring bowl of thin soup. I offer my compliments for the salad also, it was perfectly fresh with delicious dressing. The maki were all also delightful, every ingredient being fresh, the spicy tuna was actually spicy with big pieces of tuna rather than the minced to death and over-mayonnaised stuff that is more commonly found at other sushi restaurants in the area. My husband's kung pao chicken was also very good with just the right amount of spice, not too much sauce, well-cooked veggies and chicken that you could actually identify as having once been part of a real bird. The green and jasmine teas were also very good. The prices were aligned well with the service and quality of food, we'll definitely be back to this location and of course to the other sister restaurants. —StephanieTodd

2008-12-21 21:27:29   Wok With You is, despite the corny name, one of my new favorite places to eat. The staff is very friendly, and it's never crowded (especially at lunchtime). Granted, I've only ordered the Thai entrees, but they're just too good to pass up. The green and Panang curries are excellent - better than The King and I, much more flavorful. The portions are huge (plenty for lunch the next day), and the vegetables are fresh. I've also had the tom yum soup (big portion, lots of veggies, broth OK), edamame, and tea. They have an extensive sushi menu, a 'make your own soup' section, as well as thai, chinese, vietnamese pho, and other noodle dishes on the menu. Give it a try - very tasty! —MRich

2009-01-16 17:21:35   Had lunch with a friend and it was a great surprise! Very tasty dishes- fresh veggies and tender meat. The hot and sour soup wasn't really all that hot or sour but my friend had the tom yum soup and it was terrific. The cold rolls were delicious. I will be both visiting and carrying out from them again! —ShawnaLusk

2009-03-03 20:49:55   After our third try, my wife and I are giving up on Wok With You—two bad experiences out of three is too high a proportion. We ate in the restaurant on our first visit. My chicken panang was good, and the spice level (6) was pleasantly hot. My wife ordered sushi, however, and the final bite of the salmon egg roll contained one or more eggs that had gone bad. Probably the rest of the eggs were less conspicuously spoiled, because my wife was ill for the rest of the night. The second try was take-out chicken panang, spice level 6 again, and it was good. So, we decided, maybe the rotten salmon eggs were an aberration—what did we expect ordering sushi on a Sunday night? The third try was also take out—lemon grass chicken and chicken panang. BIG disappointments. The lemon grass chicken was breaded, deep-fried to the texture and taste of cardboard, and lacking even a hint of lemon grass flavor. And this time the chicken panang, once again spice level 6, was too hot to eat. Enough's enough and there are good Asian restaurants in the area. Wok With You will have to wok without us from now on. —FredHarvey

2009-05-10 19:10:03   Went on a Saturday afternoon - was moderately busy. I had the chicken fried rice, and it was excellent. Husband had either General Tso's or Szechuan chicken (can't remember which) but it was also good. Our waitress was not at all friendly, but was prompt. Didn't care for soda out of a can.......I know this is near a college but you can do better than that! We would probably return again if in the area. —DGandDJ

2009-06-23 01:40:48   My boyfriend and I eat lunch here all the time. Very nice menu. Masamaun curry and sesame beef are our favorites and very well made. The scallion pancakes are a little crispier than I am used to but still very tasty. We get delivery to work and they are very fast - the food is always correct and hot! —MelonPunch

2009-12-04 11:21:11   Great food - we've tried scallion pancakes (best I've tasted), yasa gyozo (veg dumplings)and noodle dishes. I like their cashew chicken and schezwan vegetables. Friends of mine like the pho too, though not as good as SEA on Monroe Avenue. —MVP

2011-02-02 15:29:11   Wok With You needs to increase the quality of their food if they are to survive in the area imo. The food is nothing better than what you would get at any Chinese take-out place. The restaurant itself is nice and not too expensive, but it's just not that good. I've only tried their General Tso and Kung Pao, but I have had better at most Chinese take-out places. —ytbh

2011-02-09 17:11:47   I really enjoyed their sushi and ate their all the time w/ restaurant.com certificates. They've unfortunately stopped accepting them (found this out arriving there, certificate in hand, to find sign on their door saying no more restaurant.com certs). Food is good, wait staff nice, management sucks for stopping restaurant.com (still haven't gotten my money back for it btw). —groovinit

2011-03-13 08:33:19   I had received a restauarant.com certificate to for this restaurant and was excited to try it. When I arrived there was a handwritten sign in the window stating that they would not take it. They did apologize and told me that they were not making any money off of them so they would not take them any longer. The shrimp pad thai was good although I thought $7.95 for a lunch special was a little high. The spring rolls were fresh but did not have anything in them were not very good at all. The ones at Dac Hoa are a hundred times better. We were brought water and never asked if we wanted anything else to drink. We were only of two tables in the restaurant on a Sunday afternoon. The wait staff were in the back talking to each other and did not come out to check with us and then we had to wait 18 minutes for someone to bring us a check. When we got to the cash register she was not sure how to ring us out. It was not a pleasant experience at all but I was told that I could get a refund from restaurants.com which they are not willing to do. I won't be eating there again. —NTAFT