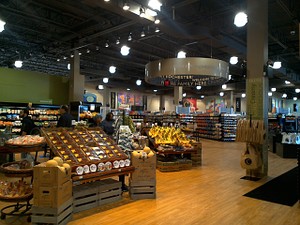 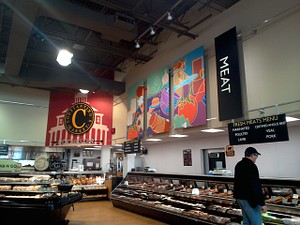 Constantino's Market is a Cleveland-based micro chain of urban neighborhood grocery stores that had a location at College Town. It was a full-service operation and offered a bakery, salad bar, restaurant-quality prepared foods, catering, a large beer selection, a cafe area, and regular tastings and demos. Their managers were previously the owners of R's Market and are familiar with the local food culture. Their sushi was from Shema.

They closed in February 2016, citing lack of profitability.


2015-04-09 14:14:09   Stopped in today and was rather disappointed. Locally produced items were few and far between—I saw Flour City Pasta and SoyBoy. I was after some random items: hydrogen peroxide, soap, milk, and jelly. The peroxide was a pint that cost as much as a quart elsewhere, all the soap was national brands with no local or organic, Upstate Farms was the only milk (and here I was hoping for Pittsford Farms ... at least it's regional) and the jelly was entirely national brands. It's about equivalent to shopping at Wal-Mart only it's smaller and closer to where I live. It's not much different from CVS 'cept it looks like a grocery store, and its a fair bit better than a gas station. —JasonOlshefsky

2015-04-12 18:22:00   Very nice! Not a huge place but big enough that a family could do a full week's shopping here. The only drawback is they don't carry much in the way of local (although there is some), organic, and other specialty foods (you want Hart's or Abundance for that) - it's mostly general name brands. But overall, this is a wonderful addition to the neighborhood and I'm very happy with it.