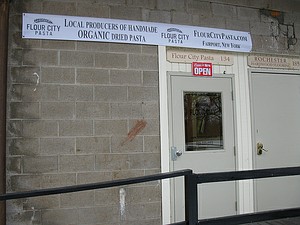 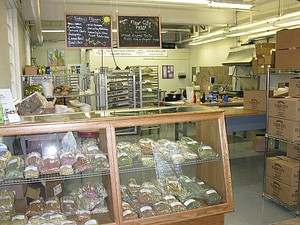 Flour City Pasta is a bakery that specializes in organic handmade pasta, including gluten-free varieties. In 2012 the owners opened a retail store in Pittsford, which they closed in September 2014 to focus on expanding flavors and distribution.

Their products can be purchased at:

Facebook page that "One of the requirements of having a trademark is making sure that other people don’t use our name in our product category. Our category is food products. It’s called 'policing the mark'. It’s designed to protect the public." The bread folks pointed out that Flour City has been a Rochester nickname for over 150 years and some 60 businesses since then have used it.
Flour City Pasta countered that "No one, least of all us, has a monopoly on the name Flour City. Anyone who claims that we are trying to make money by controlling the name 'Flour City' is misinformed."

2) Your six-year-old business does not own a 150-year-old nickname, especially one that's already been used by dozens of local businesses.

Seriously, what a joke.

2015-10-04 21:20:03   This legal action is silly and frivolous, we won't be making any purchases from this company, they should be concentrating on their product, not baseless legal claims. —DottieHoffmann

2015-10-05 10:22:10   I for one will NOT be doing business with this company after what they're trying to do to another LOCAL (which is the complete opposite of this company) business. The legal action they're taking against Flour City Bread is ridiculous, and is going to cost them a lot of customers.

Also, $9 for pasta that falls apart in the water? Please, you can do so much better out there. —FoggyDudes

2015-10-05 10:43:37   This legal action by Flour City Pasta is a foolish tactic that’s sure to garner more backlash than benefit. Their product is also a prime example of when local is not better. Any mistaken association with the Bread Co. could only be favorable to Flour City Pasta and certainly not the opposite. —jjjingleheimer

2015-10-06 18:29:51   This legal action leaves a bad taste in my mouth, the Rochester area and Rochesterians are the backbone the "Flour/Flower City" not some company who not even located in Monroe County.