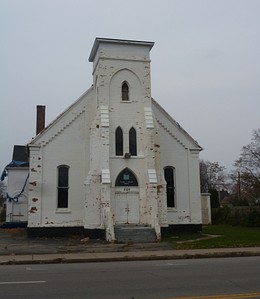 Westminster Presbyterian Church was an historic church building in Bull's Head, right over the border from the Susan B. Anthony Neighborhood. From 2012-13 its proposed demolition and replacement with a Dollar General was the subject of heated controversy between property owner Marvin Mayes and a preservationist coalition led by the Susan B. Anthony Neighborhood Association. It was destroyed in a suspicious fire on June 26, 2015.

Westminster Presbyterian Church was originally built as a one-room chapel in 1859. Like most churches of its day - especially those founded by immigrants and other groups lacking financial resources - it started out as a small space and gradually expanded. In 1870 the congregation constructed a large addition.1 According to a nearby resident, writing in character as Susan B. Anthony:

Built in 1859 (during my lifetime) the church was a bustling chapel that helped German immigrants make Rochester home. With the help of the church the German community grew and thrived. Together they built Bausch and Lomb, the Genesee Brewing Company, the plant nurseries that dotted our growing city and much much more. They're even responsible for our nickname - the flower city. It was so great to see these men and women embrace the opportunity that America represents.2

The congregation left in 1915 to build a bigger church. The Westminster building remained in German-American hands, however, as the home of the Leiderkanz Club until 1974.3 They added a cinder block room to the back in the 1940s. The old church served several other congregations before being abandoned for good in the late 2000s. Though vacant, it was zoned as a

Designated Building of Historic Value eligible for listing in the State or National Registers of Historic Places.

Marvin Maye, owner of many commercial properties around the City of Rochester, purchased Westminster Presbyterian Church at auction c. 2011. Working with local developer Craig Walker, he petitioned the Zoning Board to remove the church's historic designation so that he could demolish it and lease the land to Dollar General.

Reaction from neighbors was swift. It was pointed out that there were already numerous dollar stores within a 5-mile radius around the church, including a Family Dollar only 0.3 miles away. Others called attention to the back taxes owed by Maye to the City and alleged that he had a bad history of neglecting his properties. Maye's buildings, it was said, are marred by trash and peeling paint and are magnets for loiterers and drug dealers.4 The Plymouth-Exchange Neighborhood Association stated that they had tried to work with Maye to clean up his MLK Plaza on South Plymouth but he never kept his appointments to meet with them.5

Walker, on the other hand, argued that "not one preservationist stepped forward" with an alternative use for the church, and that he himself had been interested in turning it into a jazz club until learning of the steep costs of conversion. He claimed that a Dollar General would provide much-needed retail and fresh food for the primarily low-income neighborhood.6

Bread & Water Theatre actually did express an interest in making Westminster their headquarters, observing that the Northwest Quadrant lack cultural organizations while the Southeast is saturated, making it difficult for them to stand out.7

Ultimately at the heart of the debate was the direction of progress in a neighborhood presently undergoing revival. For the past ten years the area had seen millions in public and private investments, including the Voter's Block Community project, the The Lofts at the Carriage Factory, the Frederick Douglass Apartments, the City's development of the

Heritage Trail, and the efforts of urban pioneers who moved into and rehabilitated the area's many vintage homes. Maye's opponents claimed his plans posed a serious threat to their efforts to reinvigorate the West Main corridor as a center of Rochester history. The owners of the house next door at 644 West Main - built in the 1870s by a cousin of President Rutherford B. Hayes - announced that they will be forced to move if the Dollar General was built, citing problems they already face with the Zeb II Plaza Maye owns on the other side of their home: "Weâve found crack rocks in our driveway. We constantly find dime bags in our yard. Weâve even caught a prostitute on the church steps."8 As of March 21, 2013, it would seem that the preservationist have won. At the Zoning Board hearing held that day, the state reversed itself and found the building is eligible for listing on the National Register, based not on architectural significance but on its status as one of only four surviving buildings associated with Rochester's German-American community.9

The victory was short-lived, however, as the city's Zoning Board of Appeals ruled that the former church could be torn down in August 2014 on the condition that Maye build a grocery store in place, rather than a Dollar General. The owner of the house next door subsequently put her home on the market. Still, preservationists and the neighborhood association vowed to fight.

A three-alarm blaze was reported at the church at 1:00AM on Friday, June, 26, 2015. It began in back add-on and spread quickly to the sanctuary. 65 firefighters were called to the scene, with one taken to Strong Memorial Hospital for heat exhaustion. 10 Maye's opponents were quick to call the fire suspicious. What happens next remains to be seen.

The Young Urban Preservationists had been in the process of planning a pop-up event to convince neighbors of the church's value and to counteract a similar event put on by Maye, in which he even handed out t-shirts.