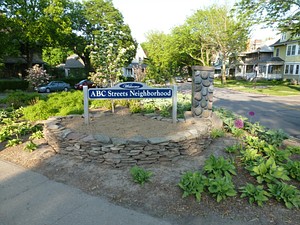 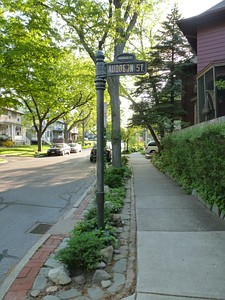 The ABC Streets Neighborhoods is a quiet, affluent residential enclave named for its eight streets that run in alphabetical order from A-H. From west to east they are:

Each refers to a famous scientist or inventor.

The ABC Neighborhood takes special pride in Morrison Park, a small triangular plot bordered by Culver, Canterbury, and Harvard Streets. The park is well maintained by the residents, who can often be seen planting and weeding. A sign welcoming visitors to the neighborhood was installed in April 2012.

Gel Salon and useless objects are located on the edge of this neighborhood, at the corner of Park and Colby.

Fun fact: George Eastman's dentist lived here and could often been seen walking his pet cheetah on a leash.

In their own words

The population of our neighborhood is as diverse as its home styles. Many long-time residents, newly-weds, young families with small children, empty nesters, young professionals and college students create a varied and vibrant neighborhood. The quiet, tree-lined streets provide a tranquil retreat for city dwellers.

Being within a short walking distance of the many restaurants, shops and establishments along Park Avenue area as well as the recently renovated Wegmans, allows residents of the ABC Streets neighborhood all of the amenities of the area with lower congestion and noise.


2012-05-15 07:47:13   My father lived in this neighborhood as a child, on Harvard St. in a house next to the highway. He remembers when the Park Avenue area actually started going downhill in the late 1960s. His family subsequently moved to Brighton, near the Twelve Corners shopping center. —EileenF