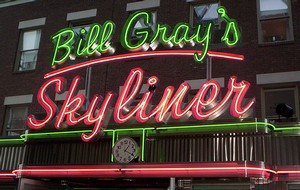 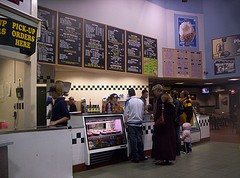 A Rochester chain that claims to make the "World's Greatest Cheeseburger" along with hots, hamburgers and, in some locations, custard from Abbott's. Bill Gray's, like Don's Original and Tom Wahl's (which, incidentally, is also owned by Bill Gray's, Inc.), is a Rochester tradition that serves a menu which has changed little in the past half century.

Though most of Bill Gray's locations have modern decor, the Strong Museum location, the Skyliner Diner, is housed in a diner salvaged from a hillside in Pennsylvania. It features a 50's jukebox and is located next to a restored 1918 carousel in the entry lobby.

It was also voted "Best Restaurant for Kids" in City Newspaper's 'Best Of' awards in 2009.7

2008-05-19 12:00:24   Bill Grays is a Rochester tradition, but I think their burger is a little too salty. Id much rather eat a "ground" at Dons Original. Bill Gray also owns Abbotts custard as well another Rochester culinary staple. —MrRochester

2009-01-31 15:58:31   Bill Gray's is a (rightfully) proud Rochester establishment but they are outdone in many ways by their smaller cousins. Tom Wahl's and Charlie Riedel's do a better job with their ground steaks (and just about everything else). Still, I'll hit up Gray's every now and again when I'm in Henrietta. —BatGuano

2010-09-26 19:12:41   Bill Gray's, one of my personal favorites! what a great cheeseburger, their fish dinners are wonderful, and they have Loganberry!! MMMMM I can taste it all the way in Florida! —LaurieStrole

2010-10-27 01:05:35   Can't defend the plate, but the burgers are excellent. Make sure to get everything on it and use the BOGO coupons available online! —SargtGrumbles

2011-06-06 09:28:53   I tried the Bill Gray's in greece the other night since I haven't had it in a while and I was unimpressed. My friends ordered the chicken club pita which they said was pretty good, but I ordered a burger which is anything but the "best burger". It was dry, flavorless, and tough and no amount of toppings could cover that up. Honestly the burgers you get from McDonalds are better and cheaper. We also ordered onion rings and curly fries, both were greasy, and tasked like the had been sitting underneath the warmer for too long. No worth the money. —carolturo