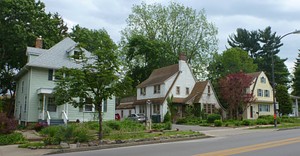 The Lilac Neighborhood (sometimes called Mt. Hope/Highland) refers to the portion of the city dominated by Mount Hope Cemetery and the University of Rochester River Campus. UR also maintains a small Mount Hope Campus that includes the homes of its President and Provost. The latter is known as the Patrick Barry House. The Lilac Neighborhood also contains part of Highland Park, including Warner Castle, while the Genesee River and trail run along its western border.

Though dominated by academia and parkland, the neighborhood does have several well-kept residential streets between Mt. Hope Avenue and South. Mt. Hope also has some commercial establishments, especially as it gets closer to the busy Upper Mount Hope neighborhood.

As of December 2015, there are plans for a student housing complex called the Gold Street Lofts on Mt. Hope.

The Lilac Neighborhood Association remains a careful steward of the area’s architectural treasures along with supporting current residents. Formed in 1991, the Association publishes The Lilac Letter newsletter five times a year to publicize neighborhood activities. These include an annual Memorial Day weekend plant sale, a summer ice cream social, garage sales, block parties and garden tours. The Association uses funds from the plant sale to create welcome baskets for newcomers lucky enough to find a home in this historic and people-friendly city neighborhood.