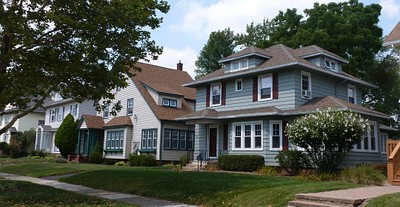 With around 22,000 residents, the 19th Ward is the largest neighborhood of the city. Due to its prominence, many people not familiar with the area confuse the 19th Ward with the Southwest Quadrant as a whole. The SW Quadrant, also called Sector 4, actually contains five other neighborhoods. (Plymouth-Exchange in particular is often mistaken for part of the 19th Ward.) This page covers only the 19th Ward proper.

The 19th Ward is bordered, clockwise from its northern edge, by West Avenue, Genesee Street, Scottsville Road, and the Erie Canal. The southeastern portion is called Brooks Landing and is connected to the University of Rochester River Campus via a pedestrian bridge.

The neighborhood is one of many tree-lined streets filled with one and two family homes and a scattering of small apartment complexes. The neighborhood prides itself on its racial, ethnic and economic diversity; university professors, students, city officials, and some of the cities poorest families all live in the 19th Ward. You will even find a religious compound and a retirement home in close proximity, both on Thurston Road. Aberdeen Square Park is a popular green space, while Genesee Valley Park touches the neighborhood's southern edge.

The 19th Ward is well serviced by the city bus system and includes three exits on Interstate 390 (17, 18B and 19). It is also close to RIT, St. Mary's Hospital, the Greater Rochester International Airport, and the main campus of the University of Rochester Medical Center.

Like the South Wedge on the opposite side of the river, 19th Ward offers close proximity to campus. Rents in the 19th Ward are much cheaper, however, and the area is much more residential.

Most of the homes were built 1880-1940 and were originally intended for the working professionals of Rochester: the doctors, lawyers, dentists and the like. As such, most homes have maintained their architectural heritage. Oak floors and Gumwood trim are very common, although previous owners may have painted or carpeted over them and new homeowners may have to replace a lot of outdated carpeting, tile and/or paint. There is relatively little turnover in real estate in the neighborhood so prices tend not to fluctuate very much one way or the other.

These make excellent starter homes; after the mortgage payment, there is still plenty of money to save for the future or to get your hands dirty and improve the house. Corn Hill offers a mix of older and newer homes which tend to be larger and slightly more expensive, but they typically require no work beyond routine maintenance.

The Valley Court development, completed in 2014, added the first new houses to the 19th Ward in over sixty years.

While looking for a place to live in the 19th Ward, keep in mind the location of the pedestrian bridge, the Elmwood and Ford Street crossings over the Genesee, and the

Gold Line shuttle bus stops. On a bicycle nearly every location in this area is within a thirty-minute ride to campus by means of either Elmwood Avenue or the pedestrian bridges. The buses also have bike racks. By car your commute should be only five to fifteen minutes.

UR students looking for housing might want to check out Roc Rooms & Rentals and D'Alessandro House Buyers, both of which offer houses and apartments for rent in the 19th Ward/PLEX area.

(Note: The area directly across the river from the undergraduate campus is often referred to as the 19th Ward. This is largely incorrect. East of Riverview Apartments is actually Plymouth-Exchange and this confusion causes mild annoyance to the residents.)

The neighborhood has a bad reputation throughout much of Rochester and particularly on the River Campus of the University of Rochester. Much of this stems from gangs that claimed territory on Thurston Road, Genesee Street, Chili Avenue and Arnett Boulevard in the 1980's and 90's. However, the Rochester Police Department cracked down on them and all of the major gang violence ended in 1997 with a series of high-profile arrests.

Since then, the community association has helped organize a neighborhood watch and a group of citizens monitor the city's criminal courts to ensure that verdicts are fair, but also benefit the safety and security of the neighborhood. The NET office on Genesee Street is also available to all residents, including renters, to ensure that city housing codes are maintained. And the city government has partially funded a number of improvement projects to improve the storefronts of businesses.

The last major hotspot for violent crime was the corner of Brooks Avenue and Genesee Street, by the pedestrian footbridge, where UR students were occasionally mugged in 2006-08. As a result of increased police patrols and development of the Brooks Landing Project, this problem has mostly evaporated.

Investment by Rite Aid, Unity Health System and particularly the University of Rochester and the City have also driven a small increase in the value of real estate since 2000, spurring additional improvements, particularly on Brooks Avenue, Genesee Street and South Plymouth Avenue, especially during the latter half of the decade. Long deferred improvements to the roads and buildings along Plymouth Avenue, Genesee Street and the eastern terminus of Brooks Avenue have resulted in a marked improvement in the appearance of the neighborhood, which resulted in increased real estate values which remained stable during the collapse of the housing market in 2007-08.

The 19th Ward is predominantly residential. In the words of one resident, "We can live without boutique stores!" The motto of the neighborhood association is "Urban by Choice!" Still, Thurston Village is a lively commercial corridor with its own distinct identity. Chili Avenue and Genesee Street are also active mixed commercial-residential streets, while Brooks Avenue, and Arnett Boulevard have some small businesses as well.